I didn’t know what a quandong was when I sat down with Patricia Solomon to talk about her work at the Kulata Academy café at Ayers Rock Resort.

In less than two years, Ms Solomon has been promoted to Step-Up Leader at the incredibly busy cafe and training academy that churns out build-your own sandwiches, focaccias and wraps from morning to late afternoon.

It’s a basic concept – people select their sandwich fillings then add sauces, dressings and condiments to their stomach’s delight. 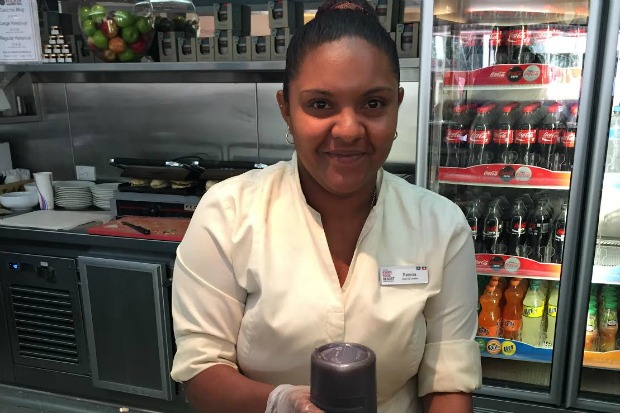 I’m told grabbing a kangaroo sanga is a visitor favorite but many ask for a taste test before committing to the whole sandwich – only to exclaim – “It tastes like roast beef!”

As you wander into Yulara Town Square, you’re more than likely to witness an extraordinary queue of keen and hungry visitors, patiently waiting for their reasonably-priced repast.

As Ms Solomon talked me through her life-changing decision to leave family in Townsville to take up a gig at the Resort, I was impressed by her passion and respect for her work, food and culture.

“I started off not knowing how to carry two glasses on a tray. Then I got the opportunity to learn from others who know five-star dining right through to working in a cafe,” she told me.

“I feel I’ve changed as a person. Two years ago, I was sour towards people but I feel now, through working in customer service, it’s opened my mind to how everyone has a story.

“Instead of being closed off, I’m now open to conversation. Everyone is so interesting.”

“Being Indigenous, I feel this is the motherland because they still practice traditional ways. So, it makes me proud when customers and guests ask me questions about me or here.

“I feel that people coming here and learning about the culture and how people live off the land, they leave with a better appreciation for the environment.”

Ayers Rock Resort has introduced a new Bush Tucker Trail at its eateries, cafes and restaurants with flavours such as Lemon Myrtle, Kakadu Plum, Bush Tomato, Quandong and Wattleseed incorporated into dishes across every restaurant.

Naturally, a selection of Bush Tucker cocktails have also been whipped up by mixologist Ty Bennett. They include a Lemon Myrtle Martini, a Quandong Capriosca and Native Mint and Desert Lime Mojito

About 14 per cent of international tourists to Australia take part in an Aboriginal cultural experience, bringing in about 5.6 billion dollars a year.

Ray Stone from Voyages says the team of Executive chefs joined forces to create contemporary dishes that add ingredients that have been used in Indigenous cuisine for thousands of years.

After my inspiring chat with Ms Solomon (who is hoping to one day be promoted to manager), and as I sunk my teeth into the Quandong cheesecake, I realised I actually love the taste of wild peach.